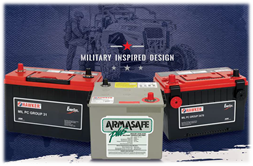 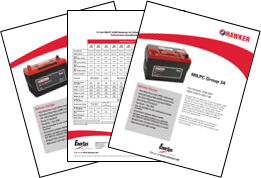 So, I heard that Hawker® offers other sizes of batteries
besides the ARMASAFE™ Plus 6TAGM.
Where can I get technical info or NSNs for those?
It's easy, just go here...
www.hawkerbattery.com

Answer to question from last issue: 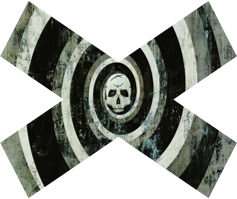 Yes, all lead-acid batteries self-discharge.   It’s a naturally occurring phenomenon in batteries in which chemical reactions within the battery reduce its charge.   You see, batteries are electrochemistry.

Now, think of those sweltering-hot Conex boxes used overseas during combat to store batteries.   If the temperature in there was 122o F, those flooded-cells were losing a whopping 24% capacity per month, whereas Hawker® AGM batteries were losing 8%.

Therefore, if you have batteries in storage, you can drastically improve shelf-life and slow the death spiral by keeping those batteries in a climate-controlled environment.   Better yet, keep them connected to a float-charger!

that the term “load” refers to the amount of current being drawn from the battery, measured in amps (e.g., a 25-amp load).   While engine start is typically the greatest single load placed a battery…headlights, instrumentation, comms, BFTs, CROWS, etc., all place additional loads on the battery…especially when the engine is off (as the alternator is no longer providing power).